Adding Educational Films into the DBQ Process Is My New Thing

I can still remember my sixth grade social studies teacher taking a film strip out of the canister and winding it around the projector and then popping in a cassette tape. As the tape played and beeped, we would watch current events in sixth grade world history class. I used to think it was like the greatest thing. It was almost a magical experience as we got to see pictures from around the globe and events that didn’t take place in north central Illinois. That was 1976. Technology for the classroom has changed a lot since I was 12 years old.

However, showing an educational film (or a filmstrip in 70s terms) is not teaching. They are tools and sources for the educator to use. You still have to engage the students with the material to make everything work. That could include using worksheets where students answer questions or fill in the blanks. They could even identify visual objects from the film and by piecing events together afterwards.

Somehow, at the end of the class, the students need to make a decision about what they’ve seen and back it up with evidence from the film. Otherwise, why show the film?

In the past 30 years, students have changed, too. Their attention span is getting shorter and shorter. I’ve come to realize that I really don’t need to show a 50 minute video over two days about some topic when what I really want the students to know can be done in 10 or 15 minutes.

YouTube is great because I can set it up to just watch a certain portion of a film. For example, I went from showing a 60 minute film on the Battle of Midway to one that sums up what evidence I want them to use that is 15 minutes long.

However, in recent years, there’s been a new wave of online digital content that is also reshaping how students can learn. By themselves, the videos are not going to teach the skills that you want them to develop in order to think critically. That’s your job as an educator. The online shorts are just another source of information that students can access. These five to fifteen minute videos might grab their attention more because of the manner in which it is produced. Most are a mixture of animation and historical photographs or films along with some fast paced narration.

One way I have been using these films lately has been to use them inside a DBQ unit. Depending on the short film, I can use it to introduce the topic, as a secondary document in the DBQ, or I can use it as a culminating event. Using the short films in this process only enhances the students understanding and also gives them a medium that helps them process the material as a whole.

I fell in love with the “History Vs.” series on TED ED as soon as it came out. Whether it was “History Vs. Genghis Khan” or “History Vs. Augustus,” I quickly began using them in the DBQs on the two figures. Students answer a mixture of questions about the subject that they can watch at their own pace.

At the end of the day, students have to achieve the objective by using evidence they wrote down from the film. Whether it is figuring out if Genghis Khan or Augustus were evil, good teaching demands students have to be able to respond to the material in some form. Having a worksheet set up for them to guide them keeps them on task towards meeting the objective. 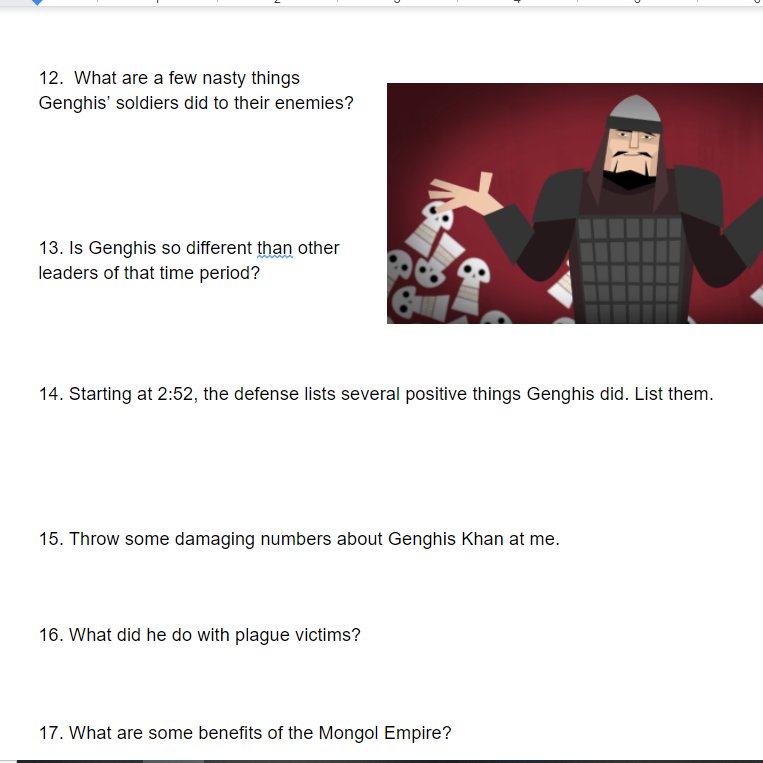 The TED ED Genghis Khan is the perfect capstone activity for that particular DBQ because students have to use evidence to come to a conclusion on the ruler’s importance and true nature. In essence, they become the judge in the film.

When I show other educational films to a class as a whole, I stop and start them several times and discuss things as we go. The key is that each video still has to be set up with some sort of anticipatory set or hook. There also has to be some context to what they’re viewing. You just can’t say, “Go here and watch this video and fill out this worksheet.” When all the students are done, you still need to follow up each video before having them use evidence from the film to support their point of view about your main objective for the day.

Above all else, these short videos are right in today’s students’ wheelhouses. They’re the right amount of time, they’re fast paced, and are action packed. The fact that the student can manipulate the rate at which they take in the information is going to be the key to their success in achieving the objective That’s really the ultimate goal. Figure out what it is you want them to learn and what do you want them to be able to do when they’re done.

Mind you, I have not gone all in on short videos, just ones that fit with what I want students to be able to do regarding that particular topic. I still do the 60 minute films, too. The DDay lesson I wrote about several years ago is now a 5 day event in what is basically one giant DBQ. It just goes to show you that you can use any sized video as part of the DBQ as long it fits with your objectives. You will need to decide which video is right for you and how and where you place it in your DBQ.

Today, I am going to be looking for a short video to use about Julius Caesar’s assassins that’s about five minutes long. As well, I want to do something similar with Alexander the Great to determine if he really was “Great.” For both rulers, their DBQ lessons I made take about 4 days each. I am OK with adding a video if it really fits with my objectives. To paraphrase “The Big Lebowski,” sometimes it really ties the lesson together.

The hardest part of incorporating any video is deciding if it is right for the DBQ and the students. Making the worksheet or materials that the students use is the fun part. Sifting through several videos can be quite the task, but when you find the right one, it is worth it for you and your students.